Interested in learning How to Sell on eBay With Your Shopify Store? Whether you are an existing Shopify merchant or someone wanting to setup shop on a platform that integrates with Ebay – this guide is here to help you sell via Ebay and your own Shopify store – with everything synced between the two.

For anyone who is serious about e-commerce, maximum visibility across all sales channels is your best bet to online success. After all, your online store is pretty useless if no-one knows it exists. The Shopify eBay sales channel opens a lot of opportunities to expand your reach, and with this combination, it’s now even easier to be found on multiple platforms and gain access to eBay’s extensive buying platform of over 170 million active buyers. 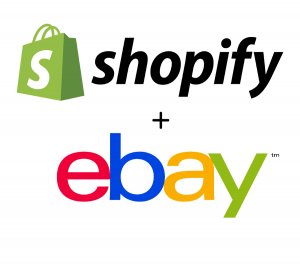 But, is your Shopify shop/store ready for it?

Luckily, Shopify makes things easy for merchants by offering a dedicated Sales channel so that US and Canadian based merchants can list items on eBay or other partnered platforms while fulfilling and dealing with inventory in Shopify (you can thank the Shopify developers for that one – quite a feat.)  So you can have your products listed and managed in Shopify and push them all to Ebay (as well as other sales channels like Amazon and Facebook) with a few clicks.

An overview of the eBay sales channel on Shopify

Shopify’s developers have made sure you can easily manage your orders in your store while the Shopify designers have given it a sleek feel so that it’s functional but great to look at. Possibly one of the cooler functions however is the ability to sync stock and orders across active channels. This means that if you have one item remaining in your inventory and someone on one platform buys it, it tells the other so you don’t accidentally create a back order and then send that awkward email to a potential customer!

The Shopify eBay sales channel also has report functions which means you can get an idea of your revenue stream, costs across the multiple platforms (think eBay shipping) or insight into your top performing products.

Who can sell on eBay via a Shopify store?

Anyone with a Shopify store can use the Shopify eBay sales channel and you can even sell on eBay without an eBay store subscription (Although, you should probably sign up to one if you’re looking to increase your sales and market reach!)

The downside to this is that you’ll have plenty of competition so it’s important to make yourself stand out. You could hire our Shopify developers to give your store a functional overhaul and extra features to guarantee that when customers from eBay start pouring in, you aren’t stuck with technical glitches. You could also consider a design brush up from our Shopify designers to make sure your branding is consistent across all of your channels so that you are easily recognised by your current audience.

How can I sell on eBay with Shopify?

The Shopify eBay sales channel has been tweaked and tested in order to seamlessly integrate the operations of the two platforms meaning you won’t have to do things like manually enter product information so selling is super easy.

All you need to do is to click the (+) under the heading “Sales Channels” and choose eBay to read the overview. Once you’re satisfied with the terms and conditions, you can simply select “Add channel”. 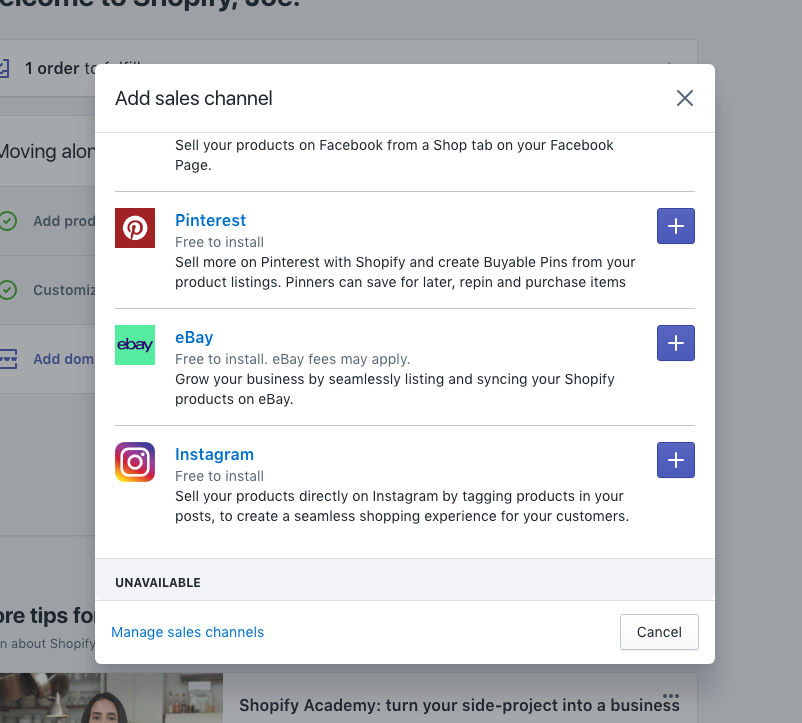 After you’ve added this sales channel, you can configure payment, shipping, and return settings; check tax tables; and configure your inventory location at any time. If you have an existing eBay account, the app will automatically import your existing settings there. Plus, there is even a review page where you can check what your title, pricing, and inventory are (among many other things), before you save your preferences and publish your store.

As a regular user with no eBay store, you can only list a limited number of items for sale. With a cleverly designed eBay storefront, however, you can entice users to check out your other products at your Shopify store. You can just choose to hire Shopify developers to improve your existing store in the meantime, or if finances do not permit, you can always scale up once your sales improve.

Which countries can use the eBay sales channel with Shopify?

As of now, the Shopify eBay sales channel is limited to US-based merchants that sell products in US dollars and Canadian merchants. This current limitation, however, is being addressed by Shopify’s developers in order to allow the platform to expand and be available to Shopify merchants in other countries.

Will more countries be available on the Shopify eBay channel soon?

With the success of the Shopify eBay sales channel in the US market, there has been an increasing demand for availability in other markets. Shopify and eBay have both promised to move swiftly so that users everywhere will be supported as soon as possible.  Canada has recently been added with Australia and UK in the pipeline.

Thinking of selling online via Shopify and eBay?

Contact our Shopify developers to get your store sleek and stable before integrating with ebay!

You may also be interested in our article on selling on Amazon from a Shopify store using the Amazon sales channel.